A year ago, UCLA basketball was a beacon of stability. The Bruins were coming off a surprise run to the 2021 Final Four, and they did not lose a single underclassmen to the NBA Draft or transfer portal. Alas, stability gave way to chaos in December, when a COVID-19 outbreak forced the team to shut down for 27 days. The hiatus finally ended on Jan. 6, but the Bruins continued to be saddled by injuries.

Despite all that, the Bruins recovered to win seven of their last nine regular season games and reach the Pac-12 tournament final (where they lost to Arizona). They were leading by three points with two minutes to play in the Sweet 16 against North Carolina before losing, 73-66. “It was not a smooth year by any stretch,” UCLA coach Mick Cronin says. “But in the end it was a really good year.”

UCLA faced a great deal more roster turnover this offseason, but Cronin happily accepts that if it means more health and stability in the months ahead. The Bruins lost two of their top three scorers in 6-6 junior guard Johnny Juzang (who declared for the NBA but went undrafted) and 6-6 senior guard Jules Bernard, as well as four other players who saw significant minutes. But there is arguably more collective talent on this roster, thanks to the arrival of a heralded freshman class. If the Bruins can avoid the disruptions that plagued them last season, they will be right back in the national championship hunt.

“We have plenty of talented freshmen, and we have some guys that are ready to play bigger roles,” Cronin says. “That’s a lot different than it’s been for us the last couple of years, but it’s also the fun of the job. I’m excited to see how it’s all going to work.”

If there’s one thing we’ve learned in the last two years, it’s that disruptions are hard to predict. That aside, the degree to which UCLA “works” this season will depend on how the team answers these five pressing questions:

A veteran, cagey, clutch, efficient point guard is a rare luxury in college basketball, so Cronin has reason to be delighted that Campbell is back for his senior season. Since losing his first season to an ACL injury, the 5-foot-11 point guard from Iowa has started every one of his 96 games for the Bruins. Campbell was named first team All-Pac-12 the last two years, and last season he dramatically increased his 3-point shooting to 41 percent while posting a career-best 3.31 assist-to-turnover ratio.

“One thing I learned a long time ago is that when you have returning guards, you have a chance to be good,” Cronin says. “His main issue has been consistency because he has had to play such heavy minutes. My challenge to Tyger is to be great every game. If he does that, he’ll be one of the top point guards in America.”

Many of Campbell’s assists went to Juzang, an efficient catch-and-shoot wing. Playing alongside Bailey will require an adjustment. The 6-5 freshman guard was a McDonald’s All-American coming out of Sierra Canyon High School in southern California, and he is the highest-rated recruit (No. 9, per the 247Sports Composite) Cronin has signed during his tenure in Westwood. Bailey is a dynamic athlete and playmaker, but like Campbell, he needs the ball in his hands to be effective. “Amari can really, really create offense off the dribble,” Cronin says. “His future in the NBA is as a point guard. Becoming a consistent perimeter shooter would be the area of ​​improvement for him, and it’s something we’ve worked hard on this summer.”

Most coaches would love to have this level of talent in the backcourt, but it’s always a challenge to mesh two ball-dominant point guards. This is a high-class problem for sure, but it’s one that Cronin believes will work itself out. “In today’s game, you’ve got to have multiple ballhandlers,” he says. “That way you don’t have to script offend as much. You just have to make sure you have good spacing.”

Can this gang shoot straight?

The Bruins are fortunate that David Singleton decided to return for his super senior year. Besides providing badly-needed veteran leadership, the 6-4 guard ranked second in the conference in 3-point shooting at 46.3 percent.

Singleton, however, only played 16.7 minutes per game, and he is unlikely to see his minutes go up dramatically. That’s because UCLA will likely replace Juzang and Bernard in the starting lineup with Bailey and 6-5 junior guard Jaylen Clark, neither of whom are proven perimeter shooters. Clark was named to the Pac-12’s all-defensive team last season, but he made just 24.3 percent from behind the arc the last two seasons. He missed six games in January and February because of multiple concussions, but when he was healthy he showed flashes of potential as a scorer. During a three-game stretch in February against Washington State, Washington and Arizona State, Clark averaged 19.7 points and 8.3 rebounds, and he shot 3 of 8 from 3-point range. “With consistent minutes, you’re going to see him produce a lot more on the offensive end,” Cronin says.

The real game changer would be if Jaime Jaquez Jr. rediscovers his long-range touch. The 6-6 senior guard averaged 13.9 points, 5.7 rebounds and 2.3 assists last season, but his 3-point percentage dropped from 39.4 percent as a sophomore to 27.6 percent. Much of that was due to the pair of badly sprained ankles that plagued him over the last two months. Jaquez is garnering a lot of preseason All-America consideration, and without Juzang around he will be the unquestioned face of the program. “To me, he’s a national player of the year candidate,” Cronin says. “It’s a luxury to have a star that has a glue-guy mentality. He’s diving for loose balls, he’s rebounding, he’s defending.”

If he’s also making outside shots, UCLA will become that much harder to beat.

UCLA has some lethal weapons for Cronin’s traditional four-guard offense, but they will need Bona, a 6-10 freshman forward from Nigeria by way of Turkey, to play big in the middle. If his performance over the summer at the FIBA ​​European Championship in Montenegro is any indication, that is likely to happen. Bona led the tournament in rebounds (10.9) and blocks (2.4), and he was sixth in scoring (17.0) while shooting 66.2 percent from the floor.

Bona played two years at Prolific Prep in Napa, Calif., and was selected as a McDonald’s All-American. He is a dynamic athlete, powerful dunker and formidable rim protector. If he really is that good — if he really is elite — then that will make a big difference. “He’s a dunking machine and just a ball of energy,” Cronin says. “He reminds me of Amare’ Stoudamire with his athleticism and energy level. And he’s more effective offensively from 15 feet and in than I knew. He showed me a lot this summer. He’s got a chance to be an elite player.”

How will the international flavor taste?

In the past, a “foreign player” at UCLA was defined as someone who grew up outside of California. But with international prospects continuing to flood into college basketball, Cronin is determined to cast a wider net. So when Michael Lewis was hired to be the head coach at Ball State last spring, Cronin filled the resulting assistant coach position with Ivo Simovic, a native of Belgrade, Serbia, who spent the previous four years as an assistant at Loyola Maryland. Simovic has club experience in Serbia and Spain, and he previously served as an international scout for the San Antonio Spurs. He was the reason the Greyhounds were able to recruit Santi Aldama, a 6-11 forward from Spain who was selected in the first round of the 2021 NBA Draft and now plays for the Memphis Grizzlies.

The hire paid off in August, when Simovic helped the Bruins land Abramo Canka, a 6-7 freshman guard from Italy. Cronin still has a scholarship to give, and there’s a good chance another international import will arrive in time to enroll in school this fall. “We definitely hired him with international recruiting in mind,” Cronin says of Simovic. “To say he’s well-connected is an understatement. He’s a great guy and a good coach. We could not be happy with the addition.” 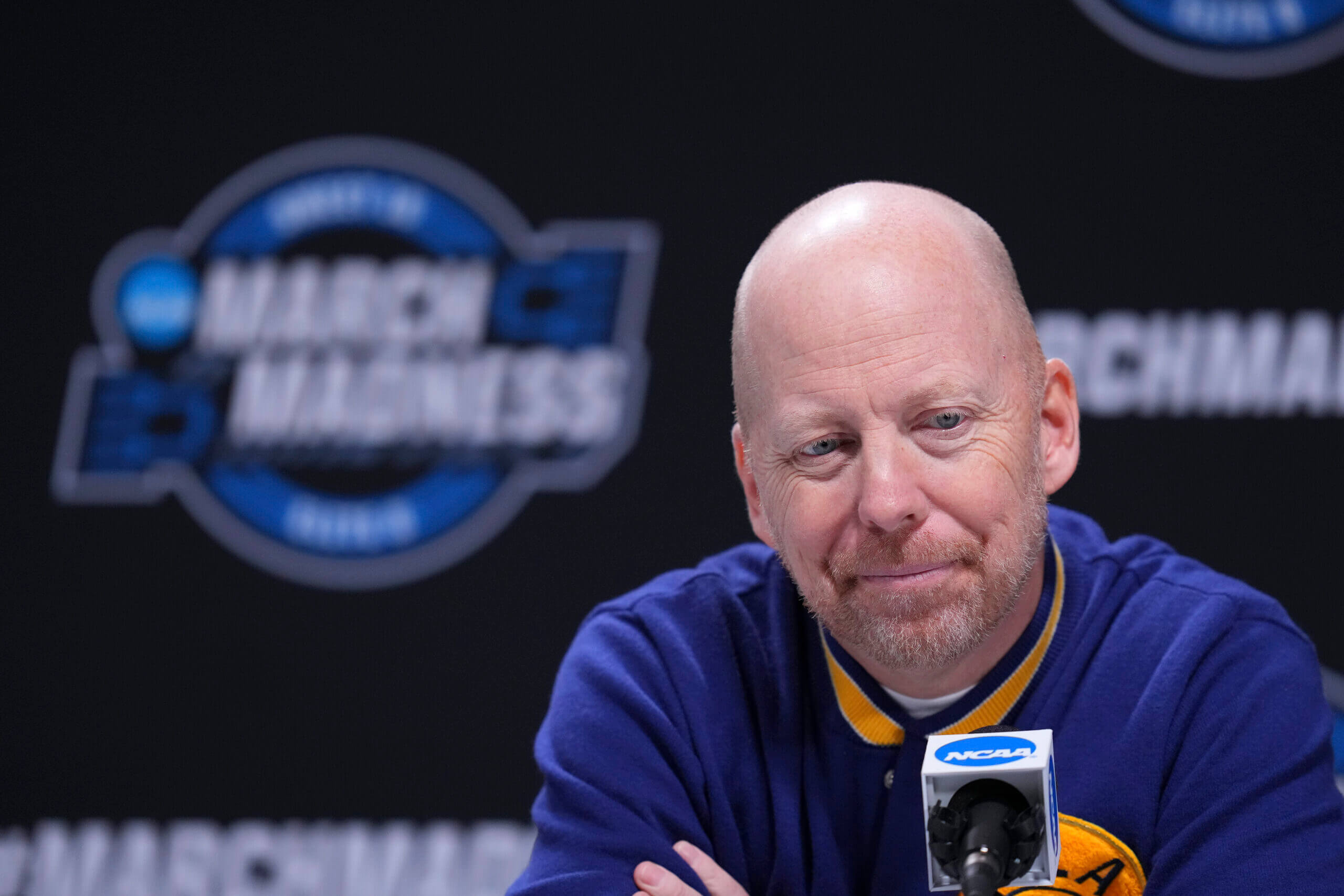 Mick Cronin has taken UCLA to a Final Four and a Sweet 16 in back-to-back seasons. (Mitchell Leff/USA Today)

How will the Bruins fare in chemistry?

UCLA is one of the world’s foremost academic institutions, but the players’ ability to ace their chemistry class on the court will be the ultimate factor in how far this team goes in March.

Like the starting lineup, the bench is a mix of the old and the new. Singleton is the likely sixth man, but 6-2 freshman point guard Dylan Andrews, an LA native who played his senior year at Compass Prep in Arizona, will be looked upon to spell Campbell and Bailey at the point. Cronin compares Andrews to forming UCLA point guard Darren Collison. “He’s a 94-foot defender, and he’s probably as quick as any guard I’ve had as a head coach,” Cronin says.

With last year’s centers, Cody Riley and Myles Johnson, having moved on, the role of backup big falls to Kenneth Nwuba, a 6-10 senior forward from Nigeria. That is, shall we say, a tall order for a guy who only played 6.4 minutes per game last season, but Nwuba appears ready to take the next step. “He’s probably grown the most of any of our guys in the offseason,” Cronin says. “He’s in the best shape of his career.”

Canka (pronounced “Zanka”) is only a freshman, but his extensive international experience playing against older, more physical players has prepared him to contribute right away on the wing.

The rotation could also include two other reserves who are coming off long layoffs. Mac Etienne, a 6-10 forward, reclassified out of high school in December 2020. He played sparingly the second half of that season and then tore his ACL in October. “Mac is better offensively than defensively right now,” Cronin says. “He’s put on a lot of upper body strength, so it’s a matter of how long it takes him to get his game legs back.”

Will McClendon, a 6-3 redshirt freshman from Las Vegas, likewise missed all of last season because of a torn ACL. He lost his senior year of high school due to the pandemic, so it has been two full years since he played in games. Prior to that, McClendon won three Nevada state titles at Bishop Gorman High School in Las Vegas.

As a whole, UCLA has more unknown commodities than we are used to seeing, but the potential — and expectations — for this program remain high. The talent is there to win a national championship, but the Bruins won’t be able to take that final step unless they master all the baby steps between now and then. “I’m a big culture guy,” Cronin says. “I know we’re not going to win unless we come together as a team.”