Dustin Johnson has earned just over $9.9m – more than his best ever PGA Tour season – in only four starts in the controversial Saudi-backed LIV Golf series… and the American leads the way in the latest event in Chicago!

By Associated Press and Kate Mcgreavy For Dailymail.Com

Dustin Johnson is already approaching $10million in the Saudi-funded LIV Golf series and he’s playing like that number is going to keep soaring.

Johnson ran off nine birdies Friday, none longer than about 12 feet, and posted a 9-under 63 at Rich Harvest Farms to build a three-shot lead after the first of three rounds in the LIV Golf Invitational-Chicago.

Johnson is coming off a playoff win two weeks ago outside Boston, and with his team having won the last two events, his earnings in four starts already is just over $9.9million. That’s more than his best season on the PGA Tour over 22 starts.

Golf has been in the headlines for months following the introduction of the controversial Saudi-backed breakaway league, rivaling the traditional PGA Tour in the men’s game.

The event is supported by Saudi Arabia’s Public Investment Fund (PIF). It has led to players facing criticism for taking part in it due to the kingdom’s dismal human rights record, while detractors have also labeled the competition as ‘sportwashing’. 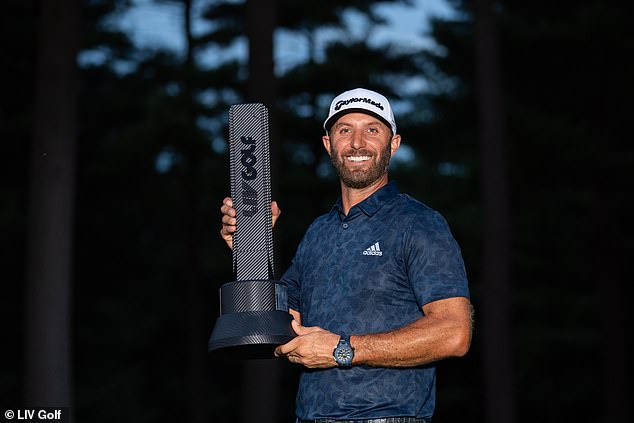 British Open champion Cameron Smith, who is one of the most recent recruits in a $100m deal, rediscovered his putting form toward the end of the round and finished with a two-putt birdie on the par-5 second hole for a 66.

Matthew Wolff had a 67, while the group at 66 includes Charles Howell III, whose round was marred by a double bogey, and Henrik Stenson, who missed the Boston event while coping with vertigo.

Phil Mickelson had five birdies and might have been a little closer to Johnson except for his one mistake, and it was a big one. He took triple bogey on the par-3 fifth hole, his sixth of the day in the shotgun start. He shot 70.

Johnson closed out the front nine with four straight birdies, three of the from 8 feet or closer. He put on a clinic on Rich Harvest Farms, built in the southwest suburbs and best known for hosting the Solheim Cup in 2009.

Even with a week off – and playing for only the sixth time in four months – Johnson kept the groove in his swing.

His one miss was on the par-5 18th and that only kept him from reaching in two. He missed a 10-foot birdie putt. 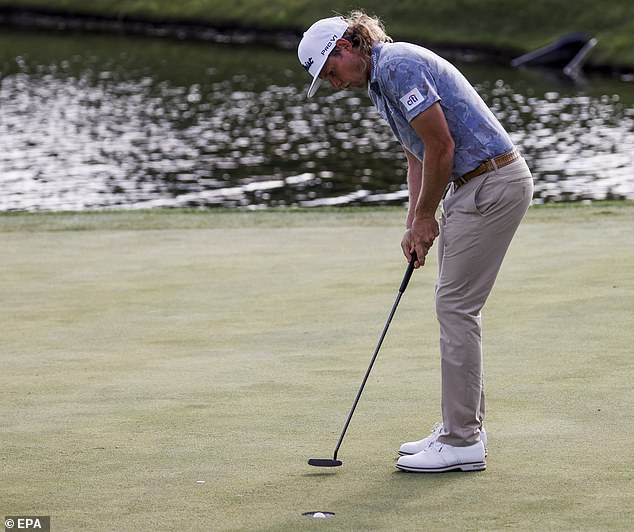 ‘I didn’t hole a lot of putts outside 10 feet. I didn’t have many long putts,’ Johnson said with a smile.

‘I’ve got my swing in a nice groove,’ he said. ‘As long as I hit a couple of balls every other day, I can keep it there. Fortunately, I’m keeping it going right now.’

Smith made only two birdies on his opening nine holes until changing his approach and seeing more birdies go in.

‘I made an adjustment out there the last five or six holes. I just wasn’t quite hitting them into the back of the hole,’ he said. ‘A little speed adjustment and a few started to go in.’ 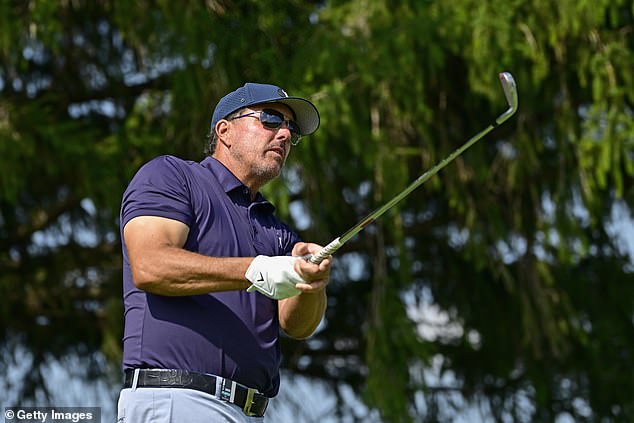 Johnson and Talor Gooch, who birdied his first three holes and was 1 over the rest of the way for a 70, are the only players to have finished in the top 10 in all four LIV Golf Invitational events.

Twenty-seven players from the 48-man field broke by on a pleasant day in the suburbs. David Puig, who gave up his senior year at Arizona State to turn pro this week, had a 73.

Patrick Reed also struggled, posting a 74 despite making three birdies and an eagle.