The trio inked their National Letters of Intent this week as part of the NCAA’s fall signing period.

“I’m really excited about this class,” head coach Cedric Kauffman said. “Matt, Jack and Eli are a very special group of guys. They are a talented with a good work ethic and have wonderful families around them that will trust us during this process. We are looking forward to working with them and making them the best student-athletes they can be.”

“With Eli, Jack and Matt we have three guys that we believe have the potential to do something special here at Kentucky,” assistant coach Matt Gordon added. “These boys are extremely hard workers, have a strong passion for the game and have the character we look for to be successful. We can’t wait to get to work with them and are excited that they are a part of the BBN.”

Coach Kauffman: “Matt is a powerful player and a hard worker. He will be one of the best serve plus one players in the business. I also love how he plays doubles. He plays with passion, moves a lot at the net and is a great teammate. I can’t wait to work with him. We are going to put him in a position to be a major impact at Kentucky. He has big goals, and we will help him reach them.” 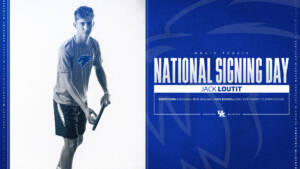 Coach Kauffman: “Jack is one of the most talented players in this class. He has picked up ATP points already and has been on the big stage in tennis. He is driven and wants to become one of the best in our sport. He is one of those players that can be top 700 in the ATP coming in. A quick lefty with a classy backhand. We will be looking to make his forehand and transition world class.” 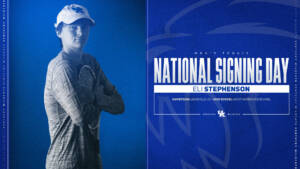 Coach Kauffman: “Eli is a hidden gem. His coach, Alex Gornet, has done a very good job with him and I think this sets him up to be an immediate impact. He has a smooth service motion and will be one of the most improved players in the country his freshman year.”